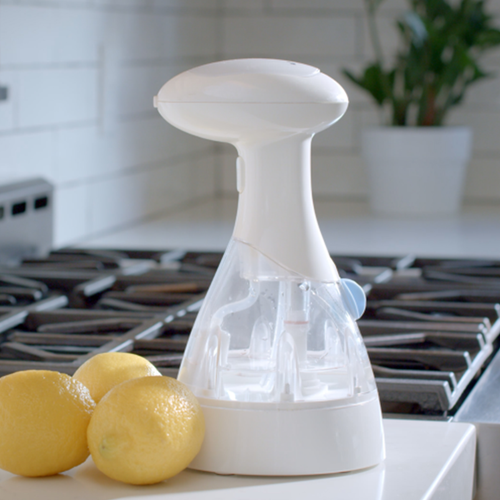 What is Aqueous Ozone?

Aqueous Ozone has been in use for over 100 years to purify and disinfect water. Ozone or O3 consists of three loosely bound oxygen atoms that readily give up an oxygen ion to react and oxidize with organic contaminants.

Ozone is a powerful oxidizing agent, when dissolved in water it works directly on the surfaces it comes in contact with. Ozone in aqueous solution also breaks down more quickly to form leaving only pure water and sanitized surfaces.

O3waterworks bubbles oxygen and water through our proprietary and patented diamond electrolytic cell. An electric charge briefly separates the O2 molecules into O- atoms that then reform into loosely-held O3 molecules that readily oxidize and destroy harmful microorganisms then return to form pure 02 molecules.

In just 30 seconds Aqueous Ozone kills 99.9% of common bacteria and every day we are pursuing research to show how it effectively eliminates other pathogens as well.

You wipe down your counters with bleaches, disinfectants and detergents, but do you wipe THOSE off? Aqueous Ozone almost immediately reverts back to pure oxygen and water.

All of our efficacy claims are independently tested by 3rd party laboratories and Aqueous Ozone is GRAS (Generally Regarded as Safe) by the FDA. The Sanitizing Spray Bottle as an EPA established number of 089373-MA-001.

The following tests were performed Using Modified AOAC 961.02 Protocol All testing done at Lapuck Laboratories in Canton, Mass., following the directions for use in the O3waterworks Sanitizing Spray Bottle manual. All tests were done on non-porous stainless steel surfaces.